In three months time I’ll be heading to the Glastonbury Festival, where I’ll be doing voluntary work with the Oxfam Stewards [n.b. I’m writing in a personal capacity here, not as a representative of the Oxfam Stewards.] As I write there’s an online petition demanding that Saturday headliner Kanye West be cancelled and replaced by a rock band. There’s 123,000 signatures on it. Given that 135,000 tickets have been sold for Glasto, at some point (probably in the next couple of days) more people will have signed the petition than are actually going.

This leaves open two possibilities. One is that in June the population of Worthy Farm will be Kanye, me and some cows. The other is that a lot of the people signing had no intention of going in the first place.

Actually it’s fairly obvious that it’s the latter. A quick scroll through any sample of the signatures reveals that a lot of them don’t seem to be living anywhere nearby. 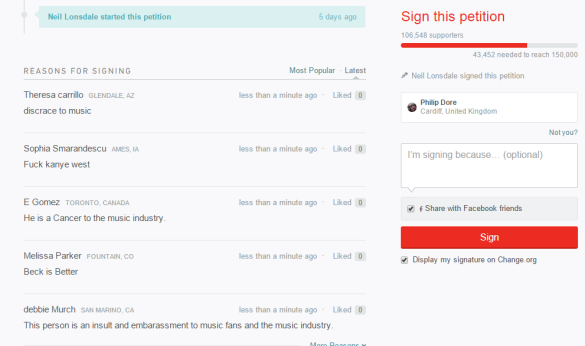 Yes, I know people do travel from overseas to attend Glasto. Even so, when the overwhelming majority of signatories are from across the Pond, it seems reasonable to conclude that this is nothing to do with what Glastonbury audiences want. It’s simply yet another example of collective, self-affirming clicktivism.

Amusingly, the guy who started the petition recently admitted he’s never even been to Glasto. He will, however, be going this year. When he gets there he’ll no doubt realise that the festival has multiple stages, plus cabaret, a circus, political debates, dance venues, environmental workshops….you get the picture. He’s not going to spend Kanye’s slot wishing he’d brought a book.

So, why is there this huge petition? I’m not a fan of Kanye (Friday headliners the Foo Fighters are more my thing), and it’s fair to say the guy has, shall we say, a certain lack of humility. That said, while he may have a habit of making a nitwit of himself at award ceremonies, he has his positive points too. For one thing, unlike various other prominent rappers, he’s spoken out against homophobia in rap.

Some of those signing the petition insist that he’s “not a positive role model”. Personally, I don’t weigh up ethical dilemmas by thinking, “What would Kanye do”? I’m not really sure who does. Even so, since the petition calls for him to be replaced with a rock band, it’s worth pointing that rock is full of people who are hardly icons of morality either. Let’s see, there’s Eric Clapton, who back in the 1970s was praising Enoch Powell and making racist speeches onstage. In same decade, Jimmy Page kidnapped and had sex with a 14 year old girl. In fact, if you want to be seriously disillusioned of some of your rock icons, just type the words “baby groupies” into Google. There’s enough material there to keep Operation Yewtree in business for years. But if Kanye was replaced with Clapton or Led Zeppelin, I’ve no doubt the people signing the petition would be celebrating.

Partly this is all a rerun of something that happens every year. Whether it’s Jay-Z, Beyonce, Metallica or Kanye, there’ll be a crowd of bores whining that they’re “not a Glastonbury act”. Usually that crowd is made up of people who either haven’t been to Glasto in years or have never been in the first place. Certainly they always seem to have a ridiculously narrow view of what’s supposed to be a “Glastonbury act” at one of the most musically-diverse festivals in the world.

I have no idea what Kanye is making of all this, though I’ve got a suspicion that his ego is probably lapping it up. Part of me wonders if he’ll do anything that’ll top Jay Z’s response to Noel Gallagher dissing his Glastonbury show in 2008.

In fact, my curiosity to whether he will is pretty much the only thing that may cause me to check out his act in June.