Earlier this week I met up for a pint with Victoria Betton, author of the Digital Mental Health blog. This turned into quite an in-depth conversation about social media, and the way it’s used by people who work in or use mental health services. After we met I decided to jot down some of the thoughts and ideas we were bouncing about, and put them up in a blog post.

Where are the subversive professional blogs?

Victoria commented that apart from the Not So Big Society and The World of Mentalists, she hadn’t come across many subversive blogs run by professionals (or in the case of The World of Mentalists half-run by a professional, since I co-edit it with Pandora). I must confess that I was pleasantly surprised that either of those blogs would be considered subversive. Once I’d recovered from the unexpected compliment, I did find myself agreeing that a certain chill has set over the health blogging world – from the professional side anyway; the patient side is flourishing. I’m not saying there aren’t good-quality, subversive bloggers out there – look at Stuart Sorensen and the 20 Commandments for Mental Health Workers. Even so, when you look back to the spleen-venting polemics of NHS Blog Doctor, Dr Rant and Militant Medical Nurse, it’s hard not to feel that professionals are increasingly cautious about what they stick on a blog or a tweet. I’ve felt this myself, and I’ve noticed that there’s things I might have said online three or four years ago that nowadays I just wouldn’t say.

Don’t get wrong, I’m not suggesting we all go out and start swearblogging. There are, after all, good reasons why professionals are more cautious. When I first started blogging on the now-defunct Mental Nurse, there were no guidelines from regulators about social media. Then one day an article appeared in the NMC News, basically saying it’s okay to blog, so long as you don’t breach confidentiality or bring the nursing profession into disrepute (gratifyingly, they recommended Mental Nurse as a good example of how to blog). Then a paragraph or so of guidance was issued. That paragraph has become increasingly detailed, mainly in the wake of people getting into trouble at work through social media.

As a result, professionals are now nervous about blogging or tweeting. In many cases they’ve interpreted “be careful about how you engage with social media” as “don’t use it at all”, which in fact regulators like the NMC have made clear is not their suggestion.

Something I commented on, which Victoria seemed to agree on, is that of the various professional groups using social media, one that seems to do it particularly well are the police. This especially seems to be the case on Twitter, for reasons I’ve yet to fathom. Possibly it may be partly due to the institutional sense of humour of police officers, which seems to translate well into tweeting. 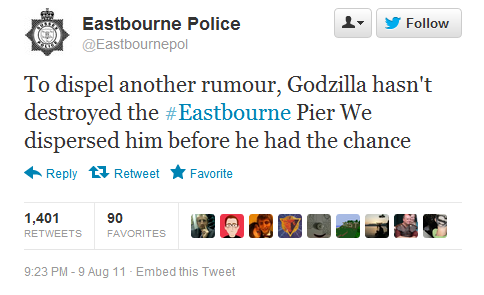 It also strikes me that Chief Constables seem to trust their officers with social media in a way that perhaps directors of NHS trusts and social services departments might not. Nightjack is an obvious exception to that, though in his case he allegedly had the misfortune to be utterly shafted by the Times, to make it look like he’d breached confidentiality when he hadn’t.

If anyone has any additional thoughts on why the police seem so good at tweeting, I’d be interested to hear them.

I’ve noticed a change in my approach to social media. Previously I thought of myself as a blogger who has a Twitter feed to promote the blog. Increasingly I think of myself more as a tweeter who also runs a couple of blogs. Interestingly, when I mentioned this to Victoria she felt she’d undergone the same change. Conversations that might have taken place on the comments thread to a blog post will now be tweeted after reading the post.

This goes to show that social media is still evolving. Different platforms come and go (Goodbye Livejournal! Hello Tumblr!) The way we engage with it is also involving, and becoming more multi-platform in nature.

I’ve generally felt more comfortable expressing myself anonymously as a nurse. This isn’t just because of worries about something I might say causing trouble with my employer. There’s been times when stuff I’ve blogged about has led to individuals trying to make problems for me in meatspace.

I do also have a non-anonymous Twitter and blog. Victoria seemed surprised when I said that I’m actually more careful about what I say under my anonymous Zarathustra alter ego than my non-anonymous one. I think the difference is that as Zarathustra I self-identity as a nurse, whereas the other identity is just me being me. So, if I want to say, retweet a rude joke, I’d do it non-anonymously, but also non-professionally.

As I said that at the beginning of this posts, some professionals are starting to avoid social media. I’m wondering if the trend might reverse. Just recently in the wake of the Twitter Joke Trial fiasco, the Crown Prosecution Service has issued statements suggesting they’re rethinking the extent to which they prosecute people for what they say online. In the case of the Twitter joke, they caused a man to lose his job, and squandered large sums of public money for something that was monumentally trivial. Their recent statements suggest they now recognise a need for balance to protect free speech.

If the CPS are starting to backpedal, and realise that they don’t need to run around prosecuting left, right and centre every time someone says something stupid on Twitter, perhaps that might lead to a climate in which people might become more comfortable in communicating online. I don’t dispute the need for social networking guidelines from bodies like the NMC, but I think it’s also important to recognise that professionals can use social media to communicate in a responsible, ethical and at times slightly subversive way. When they do, good things can come out of that.